So, real talk time. I wanted to share with you something different this week, as I’m pretty sure that I’m not the only parent that also is dealing with the same frustration as me: I get easily frustrated with my children and their fine motor skills development. There. I said it.

I can even remember when I first started to feel frustrated about this, and it was when my oldest son was an infant just learning how to pick up small bits of foods and Cheerios. For anyone following along or needing a refresher on Child Development, the Benchmarks and Developmental Continuum of Skills is a research-based tool that allows parents and educators to identify where their child is with their learning and meeting developmental milestones.

The thing about Physical Development, in specifics to Fine Motor Skills, is that there are so many factors that are involved in this major part of everyday living skills. Self-feeding, dressing and undressing, using writing materials properly, cutting with scissors, and printing legible letters are just a few of the essential skills that we want our children to master before they start their Primary Education. This is something that can be frustrating for both children and parents, whether or not a child does not have limited abilities in refining and mastery of these skills.

So, what is a parent to do when they’re trying to teach their child a new skill (like cutting with scissors) and not only is the parent feeling frustrated…but their child is too? The short answer is to continue to provide opportunities for your child and students to practice. I know this may seem easier said than done, as I’ve clearly been there before, and am still very much there today with my oldest who gives up tying his own shoes, and for my youngest who wants to cut with scissors so badly but doesn’t quite have the strength or dexterity to cut independently. It’s a frustrating process, but the lessons from Mother Goose Time overlap with so many developmental domains (Yay to research-based methods!) that a child thinks they’re just “designing” a t-shirt via their Creative Arts Lesson, when you as the parent-educator are able to gain a better understanding of how to manipulate materials to best help your child. This in turn becomes fun!

Let’s take a look at an example from this past week with my youngest. 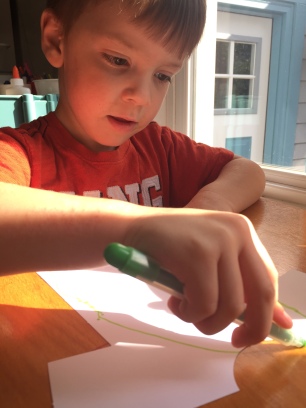 Designing his shirt with green stripes, which he pointed out was “easier than drawing the tiger like on his own shirt”. 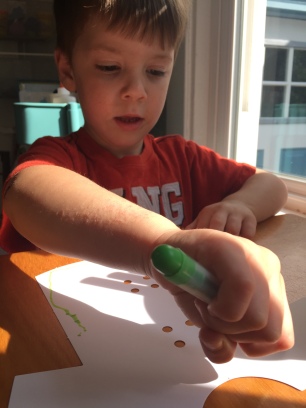 Being careful to avoid the button holes on his t-shirt design.

Until just a few months ago, Theo was very hesitant to even hold a crayon or marker, let alone try to make a mark on a piece of paper. He wanted nothing to do with it, even though he frequently observed his older siblings coloring, drawing, and doodling. I even tried a few attempts with hand-over-hand instruction to see if he would open up more and try, after seeing the correlation that putting his crayon on the paper allows the color to appear on the paper. Nope. Not Theo. My stubborn child needed to be ready to do it when he felt like it, regardless of the number of attempts made by me or my husband. And, I’ve got to say that he’s doing pretty well with his grip of writing materials, considering this is an emerging skill for him. I’m excited to see his progress daily and his careful attention when he’s really concentrating on something too. 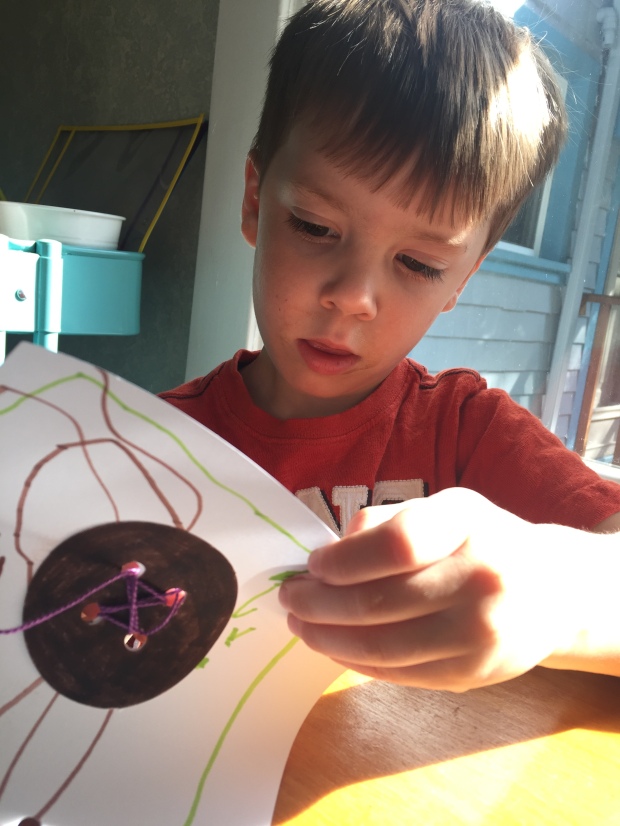 After snack (see the evidence on his face?) we came back to the table to add the buttons to his shirt. I assisted him with coloring his buttons, as it’s hard to color an entire image or area when you’re still building up your strength to complete that task. Here too I also started the first threading of the button to the shirt, and after he was able to see that the thread went through the back to the front and back down again, he got the hang of it and pulled the thread through several times before he decided that he’d had enough.

When first looking at the lessons for this week, my defenses went up almost automatically. I knew that I was going to have to be cautious in my suggestions of how he could or should thread the button on the shirt, and I typically want my children to try something independently before automatically doing something for them.

This entire lesson became fun instead of frustrating! While he colored we talked about the types of shirts that he likes to wear, he identified his favorite pajamas “Which mama are and are not shirts…they’re like pajama shirts”, and we talked about buttons on the shirt he wore for family photos, and he remembered that his dada wears shirts with buttons to work every day. 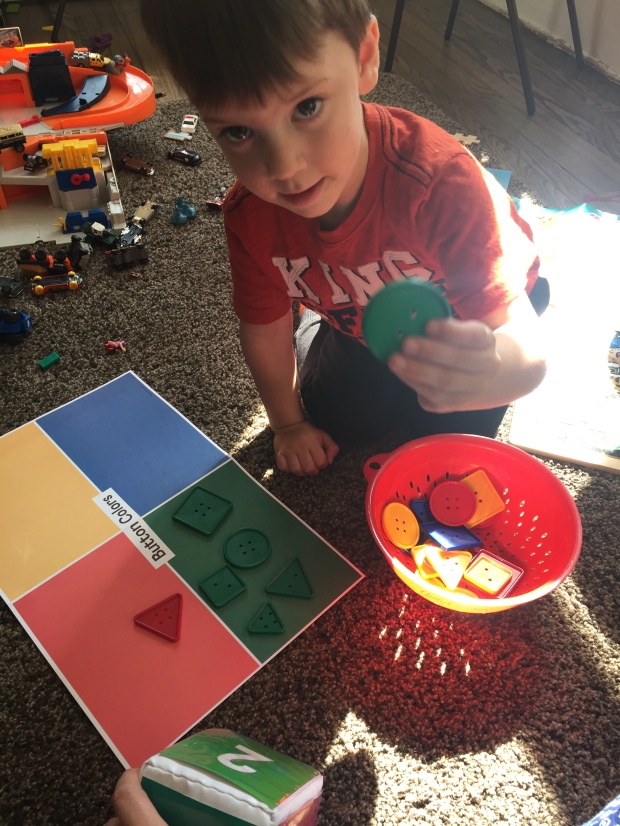 I also wanted to share one more picture from this past week, because I love how versatile the Table Top Math resources are! Theo did better with this during this lesson by separating them out on his own without using the dice. He was able to announce what color each button was before matching it up, and correctly identified the colors on 11 of 13 attempts, which is progress from another observation I’d made earlier in the month. I know that he’s had an opportunity to explore and manipulate the buttons during this lesson, and we can come back again and use the strings that came with the buttons and practice lacing and stringing when he’s getting closer to the mastery of that skill.

In closing, I’d like to say that it’s fine to admit that teaching fine motor skills to children is frustrating. Continue to make the lessons fun, unique, scaffold the material, and don’t give up. Break lessons down into smaller portions if needed, and assist after your child has let you know that they now need some assistance.

With practice, I know my oldest son will tie his shoes on the first attempt. I also know that soon enough, the scissors will all need to be hidden so my youngest son does not cut his hair, clothes, or the bin of My Little Ponies…of the Ponies that Charlotte missed, of course when she went through that faze. 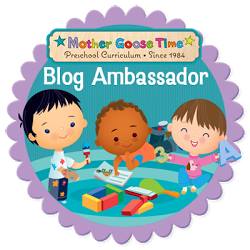 As a Mother Goose Time Blog Ambassador, I receive Mother Goose Time curriculum in exchange for my honest and authentic stories resulting from personal experiences in implementing this curriculum with my children. All opinions and thoughts are my own and are in no way influenced by others.